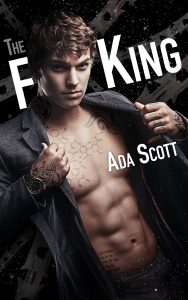 Here we go!  Chapter 3 of my upcoming book, The F King, free for you.  I'm thinking this will probably be the last chapter I make available before the release on 8/5/2016, unless there's a huge outcry for another chapter on the Facebook post or something…  enjoy!

Well, getting his attention was a little easier than I thought it was going to be. He was hot on my trail from my second pass of his table.

The problem was, maybe he was a little too hot on my trail.  I needed to catch his eye to make him think that he was the one who initiated contact, but I was always supposed to steer the relationship down a professional path.  Money and drugs, that’s what I had to pretend to want.

My CO said to gain his trust by any means necessary, but what Ryan wanted was written as clear as day, playing out like a movie behind his eyes. That was crossing some lines for sure.

So why did I stay on the dancefloor for so long? Why did I let it feel so good to have his eyes on me like that?

I could feel a little tingle on my body everywhere his eyes roamed, as if from gentle fingertips exploring my skin. More than once I found myself leaning back to let those imaginary fingertips explore down the front of my top before my ass brushed up against that concealed weapon in his pants and snapped me out of it.

What was wrong with me? Guys had looked at me before without me turning into a music-video girl for them, right?

Shut the fuck up, self

“Hello?” Ryan interrupted my internal debate before it came to blows.

“I said, is Champagne OK with you?”

“Oh. Sure, why not?  Are we celebrating something?” I asked.

“I’ll come up with something by the time we get to the toast.” He turned to the girl standing there with a little notepad. “That’s a yes, thanks, Cindy.”

The girl underlined something, smiled, and left, giving Ryan one last lingering look over her shoulder.

“Great, wanted to make sure I wasn’t accidentally calling you somebody else’s name all night.”

“Much appreciated. And Ryan, right?”

I rolled my eyes playfully. “You go to college at Highston?”

“Yeah, don’t tell the bouncer though. I’m twenty-two, but the girls I’m with are all eighteen and nineteen.”

Ryan held up three fingers like a boy scout. “Your secret is safe with me.  Why the late start?”

“Ah, it’s a sad, shitty, story. In a nutshell, I had to get away from everything.  I could see my life taking a dead-end path and if I didn’t make a change, I was afraid I’d wake up one day and find it was too late to make something of myself.  So I sold everything I didn’t need, raised about twenty bucks,” I laughed, “and enrolled here.  I had this idea that I’d figure out how to pay for everything as I went, but now I’m here, it’s a bit scary.”

“I’m sure you’ll be fine, you’ll figure it out. What are you studying?”

Ryan half-stood and shuffled his way around the table until he was right next to me. “I didn’t quite catch that,” he lied, “did you say Human Resources?”

I tried not to be too distracted by the way his leg was touching mine or the way his self-assurance wafted around me like his subtle cologne. Confidence like that only came from a long track record of getting what you wanted.  Right now, I could tell he wanted me.

The girl came back with a bottle of Champagne in a bucket of ice and two glasses. She poured them while I smiled politely at her and Ryan ignored her completely.  It was hard to keep it together under the intensity of his attention.

No man had ever been so overt with his intentions for me before. I didn’t know how exactly something like that could be quantified, but I was sure of it nonetheless.

Don’t you dare forget who you are, Sarina Beckett.

I wasn’t going to. Of course not.  I hadn’t sacrificed too much for my career just to throw it all away for the sake of some low-level drug pusher.  Even if he was dressed like a millionaire and smelled like heaven itself.

On the other hand, I did have to hold his interest, walk that fine line between too far and not far enough. There was no law that said I couldn’t enjoy the attention a little bit.

Ryan picked up both glasses and handed one to me. I accepted it and let myself look him right in the eye.

Before men realized I was a cop, I knew how to handle a firearm and I could probably take them down if it came to it, they usually complimented me on my eyes. If I had a gun to my head and somebody forced me to say something nice about my body, they were what I would blurt out.

Of course, after, they realized all that, they went off to find some dainty little piece of arm candy and I went back to focusing on my career.  Ryan would have more reason than any of them to back off even faster if he knew the truth, but it was nice to look at him and see him looking back.

He had the kind of eyes a girl could get lost in too, if I did say so myself, and he never broke our connection as he clinked his glass against mine. I thought I could vaguely feel his hand on my leg, but I couldn’t bring myself to look away to double-check.

“So, Sarina, to Human Resources. What would you use me for?”

I swallowed, shook my head a little, and looked down. Yes, his hand was on my leg.  Not on the knee either, right by the hem of my short skirt, which had ridden up because I was sitting down.

I gently moved his hand away and was rewarded by an almost comical flash of confusion across his face. It was brief, but it was there, and then he smiled the way a cat smiles at a mouse.  My heart was beating so fast as I took another sip.

Ryan laughed. “You’ll see. You staying on campus, or found your own place like the mature student you are?”

“Nah, I’m getting the whole freshman experience, staying in the dorms. Cumberland, you know it?”

“Hey! I stayed there my freshman year too.  Oh man.  You’re gonna hate it.”

“You just get in today or something?” he asked.

“What did they give you for dinner?”

I raised an eyebrow. “They called it South African beef with rice, why?  It wasn’t made from homeless people, was it?”

“I don’t think so, no, but it was probably about as South African as Neptune is, and just you wait. Maybe not tomorrow, maybe not the next day, but within the week, you will see South African Beef with Rice on your plate again, only it will be called something else and it will look like it’s been drying out in the fridge for a few days. Black bean beef, I think, was a common one.  Beef stroganoff, where they add gravy, was another.”

“Oh yeah. One time, they gave us what they called breaded schnitzel, but it was really just strips of leather in breadcrumb-colored gravel.  The knives they give you in the cafeteria are too blunt to get through.  You could make a bear-proof suit out of it, I’m telling you.”

Ryan casually draped his arm over my shoulder and took another sip. I glanced down and saw how perilously close his fingertips were to brushing against my right breast and was ashamed at how hard it was to fight down my excitement.

If I breathed too deeply, his fingers would touch the bare skin of my chest. My hammering heart demanded deep breaths.  I was caught between a rock and a hard place.  I wanted him to be interested, I didn’t want to screw up the whole investigation.  So many rocks and so many hard places.

What I needed right now was the ability to control my heartbeat like those people that competed in the duathlons, skiing and then shooting. Ryan showed me no mercy, in fact he seemed to enjoy my predicament, talking at length about the paper-thin walls in the dorm rooms and how you could hear everything your neighbor got up to, and general dormitory hijinks.

With all the care I could muster, I delicately moved his arm off my shoulder and shuffled away just far enough so that our legs weren’t touching.

“Hey, Ryan, you seem really nice and everything but-”

“I’m not,” he smiled, complete with devilish grin.

“Um… but I’m really just out with the girls tonight, trying to get my bearings in a new city and figure out how I’m going to pay for it all, you know?”

Ryan glanced at the dancefloor and chuckled. “Looks like your friends have a different idea about what tonight was for.”

I looked over and saw Sally engaged in a deep tongue battle with some guy while Violet, clearly not the shrinking variety, was practically getting fucked out there. You could call it dancing, but… so much for chicks before dicks.

When I looked back at Ryan, I saw his arm was behind me again, but resting on the back of the seat instead of over my shoulder. He was leaning in.

My traitor reflexes made me lick my lips and froze me in place instead of leaning away. I started stammering.

He was still leaning in. I was still not leaning away.  What would it feel like to have a man’s lips on mine?

“This is all too quick for me… I need to take things slow. Maybe I could get your number?  I really need to get myself settled in and stable with some kind of income first.”  I had to redirect the flow of this situation, and fast.  “Hey, I- I saw you come in and some guy gave you cash.  You selling something?”

Ryan gave me a funny look and then leaned back, his brows knitting together as he scrutinized me. Shit.  The line I had to walk was that narrow and I’d just screwed everything up.