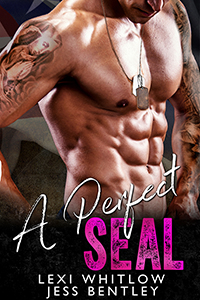 I'm back from my mission only to start a new one: Becoming a single dad when I least expected it.
The only saving grace is that my ex agreed to be my nanny.
There might a shot at a second chance for us
If I could just figure out the secret she's hiding…

I’m a SEAL, an elite warrior and all around badass.

An injury sent me back home—to the city where I lost everything. Where I lost her: Arie Blanchard, my first love.

It's impossible to forget her luscious curves and the way she moaned my name when took her virginity.

I was an a$$hole then, a player. She said I didn't deserve her, and she was right.

Now I'm an injured vet, Rear Admiral Single Dad, and Arie is willing to be my nanny.
There are some things that even the SEALs can't prepare you for.

Having Arie in the nursery is making me want her back in my bunk. But my training tells me she's hiding something big. Top secret.

After I went AWOL on our relationship, is there any way she'll give me a second chance? And when I find out her secret, will I want to?